VoSoTros as a vehicle for social inclusion 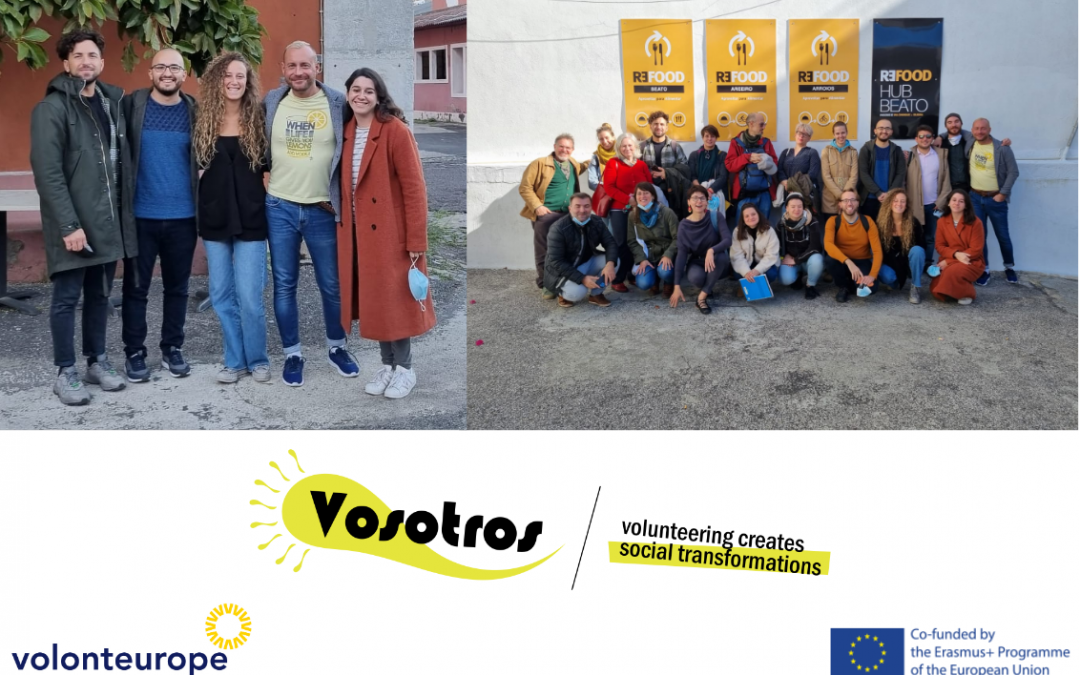 VoSoTros, an Erasmus+ Key Action 2 project, coordinated by CEMEA in France, gathers eight different organisations from France, Belgium (Volonteurope), Spain, Italy, Poland, Portugal, Romania, and Slovakia, to produce a range of evaluation methodologies for measuring the impact of volunteering on the individuals (including mentors of volunteers), structures, territories and beneficiaries.

So far, throughout the project, a learning forum in Warsaw, a study visit in Arad, a transnational meeting in Rome, and another study visit in Lisbon, have been successfully organised. Whilst the purpose of the study visit in Arad in Romania was to focus on youth, in Lisbon, getting to know the models of social inclusion initiatives was the main point. Throughout three days, between 9-11 November 2021, the project team involving more than 20 people from across Europe had a chance to visit grassroots organisations, which have, for many years, been working for social justice in Lisbon.

Thanks to our Portuguese project partner, Clube Intercultural Europeu, some parts of the study visit consisted of visiting resident’s associations, Viver Melhor no Beato, Geracão com Futuro and Renovar a Mouraria, three local associations that have been dealing with housing, children education and delivery of food. The tasks are mostly carried out by local volunteers, which necessitates so much devotion. In addition, an interesting point is that those in the organisation who are now staff or board members, most of them started off their journey as a volunteer and continued their engagement with a huge commitment. These associations are examples of volunteer-driven self-organisation that works for social inclusion. At the time when local people in Lisbon needed help from the others, local volunteers stepped in and ended up in the centre of tackling the problems. The local municipalities then stepped in as well, and eventually this turned to a very good example of collaboration between local people and public administrations.

On the second day, the study visit began with visiting Refood, which is a micro-local organisation created to re-use surplus food and re-feed those who need it most. There, we witnessed how well-focused the volunteers are on redistributing the surplus food thanks to their partners and to reduce waste by urging local people, who need food support, not to use plastics anymore. For instance, if a beneficiary wants to use the plastics for packaging their foods, they are aware that it is necessary to bring their own containers. While operating locally at micro-level, Refood is also present at the national level and has international meetings with partners from, for example, Spain or Italy, to exchange experiences. Throughout the pandemic, Refood’s role to support the local people, who have needed food, has become more crucial than ever. Refood volunteers went to people’s doors not only to bring them food, but also to offer them hope, which we all still need to cope with the issues that have been become so much more visible due to COVID-19.

Providing safe space for everyone affected by the injustice

The stigmatisation of HIV/AIDS-affected people and ostracization of drug users is always there, just around the corner. In Lisbon, GAT, Group of Activists in Treatment, founded in 2001, is a structure for cooperation between people from different communities and different organisations, affected by HIV and AIDS, sexually transmitted infections, viral hepatitis and tuberculosis. GAT is a non-governmental, non-profit organisation with health purposes, and advocates for legal and policy changes that can positively affect the health, rights and quality of life of people living with infection, or at risk of becoming infected.

The tasks are, again, mostly carried out by the volunteers. Since volunteering at GAT involves working beneficiaries who belong to fragile groups, volunteers receive specialist training and take part in programmes which help them in providing the service. They become much more aware of what they are diving into and would kinds of situations they might be confronted with. The support that comes from public health services regarding the areas that GAT is involved with can only reach some point, after which the organisations such as GAT step in. For GAT and its volunteers, it is crucial to provide a safe place for their beneficiaries and hear out their thoughts and feelings. At the same time, GAT and other NGOs demand certain legal and policy changes for their areas of work, so that they do not face the same institutional or bureaucratic obstacles in the future. To do so, effective and productive relationships with local and national authorities are constructed and GAT, and many others, are ready for further cooperation with the authorities.

United in diversity, the concept of showing unity without uniformity, and diversity without fragmentation, has become the motto of the European Union since the beginning of the millennium. To see and show this diversity, what should be done at the local level? How should we know that no one is left behind, even throughout COVID-19? These are the questions we asked ourselves during the presentation of Largo Residencias, which is a cultural cooperative that has the mission of contributing to local development, through the implementation of cultural activities and social businesses, drivers of artistic creation and dynamism, in a logic of continuity and growth. Its main objective is to promote culture and provide sustainable solutions to social and urban issues.

At the local level, thanks to community members, they have been organising diverse cultural festivals to give local people a chance to participate in them and feed their artistic needs. For those who could not physically make it to the art shows, the artists go and perform in front of those people’s houses, which clearly requires a lot of effort and time dedication by the volunteers. In addition, they have a building in which they organise big exhibitions of artists and once or twice per month, local people can go there and see the artistic works.

Throughout the week in Lisbon, I was taken not only by the beauty of the city, but by the resilience and sheer human compassion and active citizenship of so many people that I have met throughout the study visit. It showed me once again that volunteering and social action is an incredible driver of positive change in all kinds of communities, especially when people find themselves in vulnerable situations and need that bit of human support. So, thank you, Lisbon, for welcoming the VoSoTros project! And see you Nantes in January 2022.

This website uses cookies to improve your experience while you navigate through the website. Out of these cookies, the cookies that are categorized as necessary are stored on your browser as they are essential for the working of basic functionalities of the website. We also use third-party cookies that help us analyze and understand how you use this website. These cookies will be stored in your browser only with your consent. You also have the option to opt-out of these cookies. But opting out of some of these cookies may have an effect on your browsing experience.
Necessary Always Enabled
Necessary cookies are absolutely essential for the website to function properly. This category only includes cookies that ensures basic functionalities and security features of the website. These cookies do not store any personal information.
Non-necessary
Any cookies that may not be particularly necessary for the website to function and is used specifically to collect user personal data via analytics, ads, other embedded contents are termed as non-necessary cookies. It is mandatory to procure user consent prior to running these cookies on your website.
SAVE & ACCEPT